Nestled amongst the distinctive houses of the leading architects of the early and mid-20th century, such as Bernard Maybeck, John Hudson Thomas and Robert Ratcliff, sits this mid-century home with a dramatic double volume living room, gorgeous S.F. Bay views and a large lot.

It has 3 bedrooms, 2 bathrooms and 2 plus rooms on 3 levels. The front entry stairway jogs in a charming pattern so as to approach the front porch elegantly. The exterior north shingle wall is broken up by a strip of varying colored windows and by a covered front porch, providing privacy and shelter.

A handsome redwood tree creates a soft separation between the next door house and this one, both of which share the driveway. A bedroom and bathroom sit off the hallway on the main level, which opens up to a dramatic double-volume space, looking out to the beautiful Bay views. The living and dining room areas are defined by different floor levels, the dining room being 3 steps up, like a theater platform.

A large front deck wraps around the south side and extends the indoor space outside. A stand-alone black metal fireplace between the living and dining areas, does not intrude on the visual openness. A wall of fixed windows on the west and south side let in great light as well as the views and a strip of floor to ceiling colored windows break up the large wall giving it some interest. A built-in bookshelf sits below the windows. Large glass doors open to the front and side decks.

The galley kitchen, which also looks out to the views, has stainless steel appliances, granite counter-tops and an informal eating space. There is a laundry behind the kitchen and another half glass door that leads out to the rear of the property. A beautiful set of stairs leads up to 2 bedrooms and a recently remodeled bathroom with a skylight. Both bedrooms have fixed glass windows looking onto the living room as well as windows looking out at the trees.

The large lot has a natural landscape at the rear with a deck at the top and an enclosed garden in the front, with vegetable planters and a children’s play area. A passionfruit vine sits on the fence laden with passionfruit.

Substantial electrical upgrading has also just been completed. Close to U.C. Berkeley, the Rose Garden, Codornices and Glendale/La Loma parks as well as the amenities of “Gourmet Ghetto”. It is a stone’s throw away from Tilden Park. 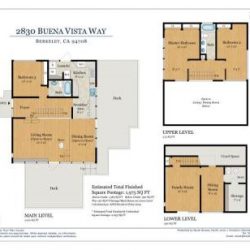